The basic D.C. drive is a variable speed, closed-loop system.

The advantages of a closed-loop system are:

▪ Effects due to non-linearity and distortion are reduced

▪ Preferred when disturbances and variations are unpredictable

A closed-loop, speed-control system consists of reference circuit (the speed set-point), a differential (error) amplifier, a firing pulse generator, an SCR bridge and a speed feedback signal from a tachometer or an encoder. Reference speed can be set by adjustment– By adjusting the reference error (differential) amplifier to a voltage proportional to the reference speed. An error signal (the difference between speed set-point and actual shaft speed) is applied to the firing pulse generator, which, in turn generates firing pulses that then set the firing angles of the thyristors of the SCR bridge. The output of the SCR bridge is a variable D.C voltage that is applied to DC motor’s armature.

The speed of the D.C. motor is dependent and directly proportional is to this variable voltage.

The speed encoder or tachometer senses the actual speed of motor in rpm and converts it to a feedback signal proportional to shaft speed. This signal closes the speed-control loop. The feedback is compared with reference set point and fed to the differential error amplifier, ad infinitum. Motor speed will remain constant until the speed set-point changes.

The torque/speed characteristics of an electronic D.C. variable speed drive with a shunt wound D.C. motor are:

Typically varying the armature voltage or the field flux– But not both, can control the speed of a D.C. motor.

Since the field flux is kept constant below base speed, increasing or decreasing the armature voltage can vary motor speed. This is done by adjusting the variable voltage produced at the output of the SCR bridge drive (phase controlled rectifier) or the average variable voltage produced by that SCR bridge that controls the duty cycle of the D.C. chopper. When the maximum output voltage of the converter is reached, additional speed can be achieved by reducing the field flux. This is called field weakening. In field weakening, the speed range is usually limited to about 3:1 to ensure stability and good motor commutation. The motor has full torque over the normal speed range and even at standstill. In field weakening, torque falls in proportion to speed but the output power remains constant. 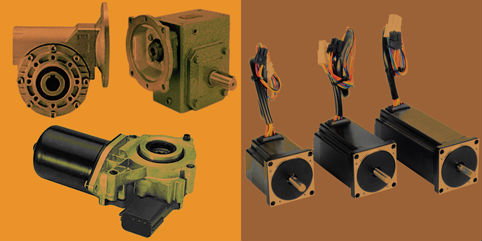 Selecting or sizing an electronic D.C. drive depends on a variety of factors that include:

By way of comparison, A.C. drive controllers cost more than D.C. drive controllers, but A.C. motors cost less and have lower maintenance costs than brushed D.C. motors. While D.C. drives have a wide speed range, they may require thyristors with higher ratings due to the higher currents associated with low speed operation.

Efficiency is the ratio of output power to input power. Low efficiency has two disadvantages: (1) costly wasted energy and (2) excessive heating of the drive’s components and the motor. D.C. drives typically have high efficiencies; however, at low speeds, they have a low power factor. D.C. drives have a power-to-weight ratio advantage, but less so compared to A.C. drives.

Most industrial loads are inductive and operate at a lagging power factor (less than unity) and so do variable speed motor drives. But, controlled SCR rectifiers or D.C. choppers reduce the drive’s power factor further. Power factor correction capacitors on the power line input or the drive’s output can be added to compensate for lagging power factors. Thyristors drives can accept limited voltage and current variations. However, for low impedance power supplies, input chokes or isolating transformers will need to be added on the D.C. drive’s input. Corrosive or explosive environments will require totally enclosed motors because D.C. motors are sensitive to corrosive and dust-laden environments.